WALLACE, Ivy Lillian (1915-2006) was a British actress, author and illustrator born in Grimsby. She was the author of several children’s series, including ‘The Animal Shelf’ series and ‘The Young Warrenders’ books but is mainly remembered for her Pookie stories, a series of ten picture books in which a little white rabbit with wings puts the world to rights. The stories combine magical fantasy with a gentle moral undertone, depicting both the animal and fairy worlds so loved by children, and the accompanying colour illustrations are beautifully detailed.

1.  Pookie (1946/7): The first book in the series in which the little white rabbit is teased about his tiny wings so he sets out to seek his fortune and finds a friend in Belinda. This copy is the revised edition, reissued in 2000. 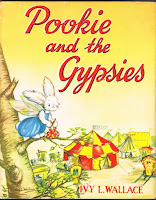 2. Pookie and the Gypsies (1947): Pookie is stolen by the wicked Circus Man and becomes the star of the show until he escapes the nasty fate that awaits him. 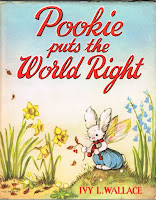 3.  Pookie Puts the World Right (1949):  Pookie chases Winter away, but the seasons get in such a muddle that Pookie has to put things right. 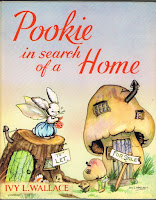 .         4.  Pookie in Search of a Home (1951): Pookie and his woodland friends avert a dreadful calamity which threatens Bluebell Wood. 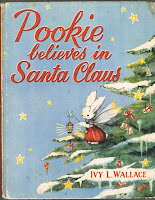 5.    Pookie Believes in Santa Claus (1953): Pookie sets out to find the truth about Christmas. 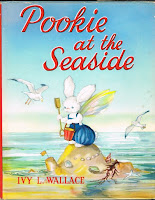 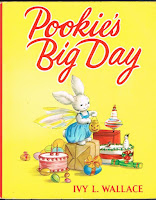 7.    Pookie’s Big Day (1958): Pookie wishes for his birthday, Christmas, Easter and Halloween all to come at once, but it's not quite as much fun as he imagined.

9.    Pookie in Wonderland (1963): Pookie meets some familiar characters in his dreams.

10.  Pookie and his Shop (1966/7): Pookie sets up shop when the goblins leave town. This copy is the revised paperback edition, reissued by Pookie Productions in 1994.

Despite the enormous popularity of these stories, especially in Australia, very little is documented about the author and her work in the various bibliographies of children’s books. Perhaps her work is considered too lightweight or sentimental, yet the reading public are still searching out her books – the Pookie title has appeared twice in the annual bookfinder.com report detailing the top 100 most searched for out-of-print book titles of the previous year and such was the demand for the books that her daughters reprinted the series in 1994 for a new generation.  Ivy Wallace died in 2006, aged 90, and her obituary in The Telegraph describes how she started out as an actress, eventually landing a publishing deal and marrying her publisher William Collins.

1
To purchase these or similar books please visit our website
www.jennywrenbooks.com
and use code JW101225 for 10% off.

Pamela Beatrice Brown (1924-1989) was just a teenager herself when she wrote her first book, The Swish of the Curtain, about a group of youngsters who set up their own theatre company, overcoming many challenges and discovering their own talents along the way. Published in 1941 during the Second World War, this book must have seemed a beacon of hope for many children struggling to envisage any kind of future.  As Geraldine Brennan writes in her review of the book in 1001 Children's Books You Must Read Before You Grow Up, 'The story of goodwill, team spirit, and hard work succeeding in unlikely circumstances must have inspired young readers in 1941, when personal dreams and projects were necessarily on hold.' The popularity of the book resulted in a number of reprints as well as adaptations for radio and television and with the earnings from the book, the author was able to train as an actress and fulfill her own dreams of going on the stage, which seems rather fitting. 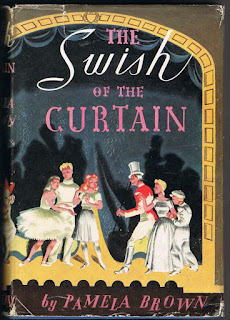 She produced four sequels in the Blue Door Theatre Series, Maddy Alone (1945), Golden Pavements (1947), Blue Door Venture (1949) and Maddy Again (1956). All were published by Nelson and the first four books in the series illustrated by Newton Whittaker, with the last book being illustrated by Drake Brookshaw. The books follow the characters as they go off to drama school and eventually become professional actors, with two of the books focusing on the youngest member of the troupe, Maddy Fayne. 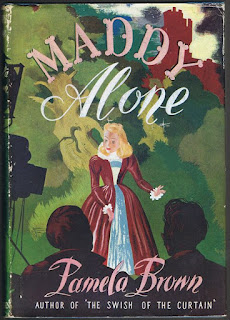 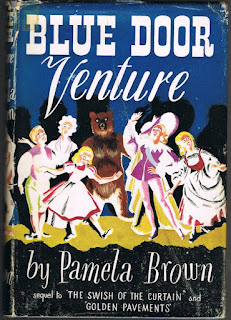 She wrote over twenty other books for children, including a play, The Children of Camp Fortuna (1949) and Louisa (1955), a fictional biography of Louisa May Alcott, plus many others with a theatrical theme in both contemporary and historical settings. Sometimes compared to Noel Streatfeild's Ballet Shoes Series, these books are equally likely to appeal to children with an interest in a life on the stage. 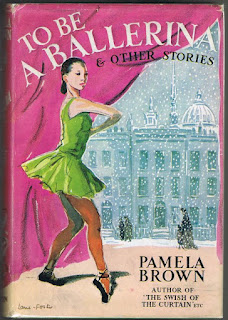 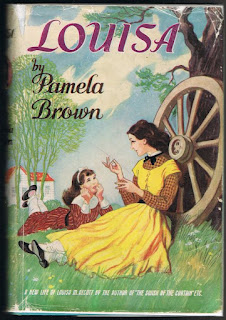 To purchase these or similar books visit our website: www.jennywrenbooks.com

New in this week, I have acquired 30 'Little Grey Rabbit' books by Alison Uttley with illustrations by Margaret Tempest, then later by Katherine Wigglesworth.  Originally published between 1929 and 1975 these gentle tales of rural domesticity, with their delightful illustrations of rabbits, hedgehogs, moles and other animals of the British countryside, summon up a bygone age and are sometimes compared to the animal tales of Beatrix Potter.  There is a book to celebrate almost every season and event in the calendar year. from Valentine's Day and Easter to Guy Fawkes and Christmas. 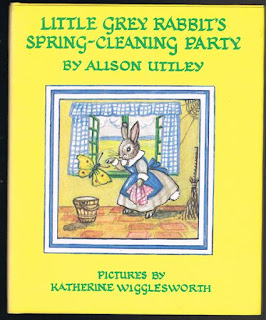 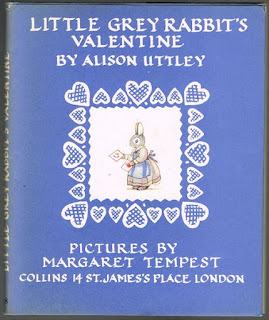 Alison Uttley (1884-1976) was born Alice Jane Taylor in Cromford, Derbyshire. A complex character by all accounts, according to Denis Judd in his biography of the author, she supported herself and her son after the death of her husband in 1930, through her writing. Her first book, 'The Squirrel, the Hare and the Little Grey Rabbit' was published by Heinemann in 1929, followed by another three titles with this publisher, 'How Little Grey Rabbit Got Back Her Tail' (1930), 'The Great Adventure of Hare' (1931) and The Story of Fuzzypeg the Hedgehog (1932). There then followed 31 titles in the series published by Collins, the last five of which are illustrated by Wigglesworth. 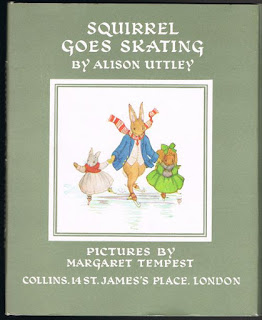 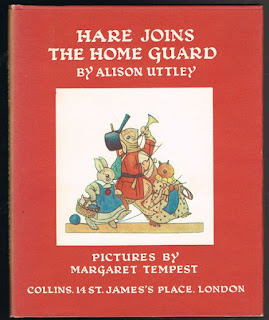 I have fond memories of these books from my own childhood, including 'Squirrel Goes Skating' (1934), a Christmas present from an Aunt who bought many books I came to treasure. Some of my favourite parts in this book include the mouth-watering descriptions of their meals (actually many of my favourite parts of books include food and there are lots of examples in children's books!).  Breakfast is 'hot tea and thick buttered toast, and carrot sausages'; a table is laid for their return consisting of 'herb pie, an apple tart, some jam puffs, and cob-nut cutlets', but when an unexpected visitor snaffles all the goodies, Mole brings a basket of 'a dozen eggs, some buttered tea-cakes, a Bakewell tart, and a cranberry jelly, some raspberry jam and dandelion sandwiches and a big plum cake with icing on the top' and a bottle of Primrose wine to wash it all down. They certainly ate well! 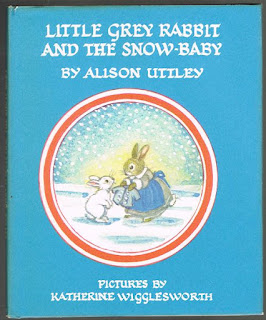 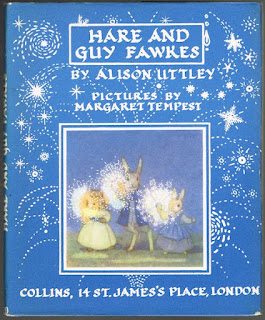 As well as the 'Little Grey Rabbit' series, which included a book of plays and a painting book, Uttley also created a number of other children's books, including the 'Sam Pig' books, the 'Little Brown Mouse' tales of Snug and Serena, the 'Tim Rabbit' books and the 'Little Red Fox' series. To purchase these or similar books visit our website:
www.jennywrenbooks.com

For more information on Alison Uttley and her work the following resources may be useful: